Space_Fetus Forum Moderator, Game Moderator
February 2020 in Events & Contests
Thank you everyone who took part in the second month of the race league event!
As stated in the rules of the league i have removed some times for being impossible lag times.
For any players looking to avoid being disqualified please refer to the rules on how to fix lag times!

Unfortunately some people are experiencing lag while racing which has caused some unfair times set which aren't possible without the lag. So a lag rule is being put into effect!
Any time 2 seconds more than the next fastest time due to lag will not count. In some instances this margin will differ. For example if there is a time of 52.07 seconds but every other time is 53 seconds you could assume that a player hasn't managed to beat the next 20 people by a whole second and rule it as a lag time. This will be judged on a race to race basis. As there is no fix for lagging at this time players are advised to stop the lap if experiencing a large amount of lag and waiting till it has subsided to continue. Not only does your lag time not count but the bumper will prevent you from setting a true time because you can't beat your "lag time" which will stop you from competing in the event.
- If a player does set a lag time submitting a screenshot of a "proper time" to me via DM on the forums will be accepted as long as it shows both the time and a time stamp using /time in game. Players who are deemed to have a lag time will be disqualified from the month if no screenshot is submitted by the end of the months race, this will be done on an honesty system you will not be prompted to submit a screenshot you will be expected to "own up" to your own lag times.
Winners
The top 10 people on this list will win 25,000 cubits!
The top 20 people will earn points for the overall leader board of the race league! 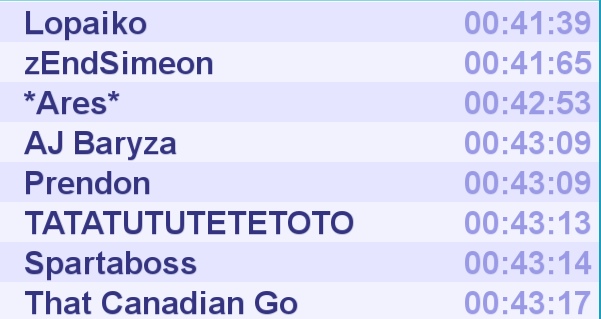 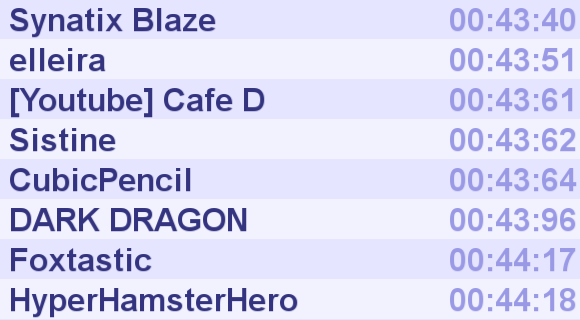