gdog Retired Moderator
November 2017 edited November 2017 in Suggestions & Comments 107.55 Karma
So I've recently been having my shrink wand equipped for the first time in awhile.
So much fun and not just the pvp aspects of it. Seeing a little qbee run around or be literally engulfed in a cup of coffee is too funny. 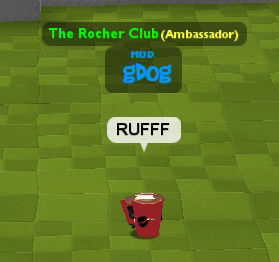 The only downside is that its a very short period of time that you stay small.
My suggestion is a shrink bumper that the owner can place down in their realm and allow players to bump it to toggle between a big qbee and a little qbee.
This could also work really well for some parkour or adventure maps as being that size will allow you to squeeze between certain blocks. eg. Trunks, bars and pillars etc.
You could make mini parkours by having a bumper at the start of the course and then having pillars or other blocks that only little qbees would fit trough. Pixel and sculpty blocks would be perfect for this. If you died while on the parkour and spawn at a checkpoint it would keep you as a small qbee until you left the realm.

Next idea is just to make toilets work like chairs so when you stand on them you sit down.
As Michael Stipe from REM said. "everybody poops, sometimes"
I may be mishearing those lyrics lul.
Yeah why not tho. It'd make it that bit more immersive for role players etc.

I always try to suggest stuff that is easy to implement. The mechanics for both these suggestions are already in the game so why not? What do do you think?

«12»
This discussion has been closed.